To start with, these are awkward photos–taken into the sun on my run this morning. I often run around this small lake in town, as its a soft path with a bit of nature, a gorgeous view of the mountains, and coming to and from my house, it makes a tidy 5K run.

The houses surrounding this bit of open space are on the large side, as its a pretty nice place to live (see above virtues). However, this morning I became aware of an awkward aspect. As I was running, I heard a lot of goose honking, which isn’t surprising as a number of geese spend time here, and I’ve seen a few families with goslings recently. However, as I was finishing my lap of the lake, I looked up and realized that some of the geese were perched atop the roofs of these houses.

One house had a singleton goose, looking for all the world like a ship’s figurehead, I’m sorry I didn’t stop and get that photo, and then as I progressed, I realized the next house had two geese on its roof. Back and forth went the shouting and honking, I was reminded of opposing teams at a football game.

the pair from house two departing 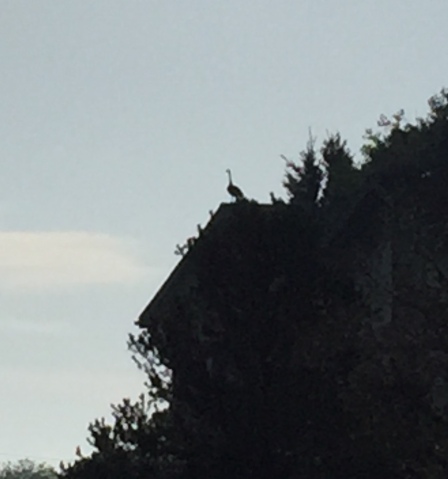 Hard to see, but here’s the single goose from house one.

Great house, great neighborhood and views, but don’t try to sleep in!

June 2017: I started writing Curioussteph.com with this: By day, I'm a retired family physician turned body-oriented psychotherapist. I garden, travel, am owned by 2 elderly cats, figure skate and am training for my first triathlon. April 2020: Three years later, the two elderly cats have crossed the rainbow bridge, and we now have an 11 year old adoptee, Ziggy. I'm done with triathlon and skating for the time being, and I am still physically active, running, biking and walking. It's now the time of the coronavirus, which is affecting us all. Coincident with that, my 90 year old father's replacement aortic valve is failing and he is now in hospice care. November 2020: I've added a new blog, Frog in a Hot Pot. Its of a more introspective nature, as I explore more of where I am in life and how it came to be this way, and how I find a way out of "hot water" View all posts by curioussteph