When I wrote the first Cat Tales post a few weeks ago featuring our former neighbor cat, Waylon, I had roughly sketched an order of appearance for the cats I planned to include. What was I thinking? These are cats, after all, known for doing things in their own way and own time, with little regard for another’s plans. Jules bumped the line big time by dying last week — Good-night, Sweet Prince. This post is in honor and memory of “Little Man”.

Jules lived with us for nineteen years, joining our household as a kitten along with his sister Lucy. He was a handsome fellow, known as a tuxedo in the cat world, black with white trim. I likened his white feet to Converse sneakers; low cuts in the front, and high-tops in the rear. His eyes were a lovely aquamarine color, leading to a suspicion of some Siamese in his lineage, which was also supported by his tendency to “talk” in a rather yowling fashion. He wasn’t as chatty as most Siamese cats I’ve met, but when he had something to say, he made sure you knew about it, and in not particularly mellifluous tones.

Early on in our lives together, it became apparent that Jules exemplified the phrase “nervous as a cat”. He was fairly relaxed and calm around BA and me, but any visitors were cause for high alert. One of his favorite places to hang out was in the front room upstairs. He would often sit on a table in front of the window, observing the world. Then would come a knock on the front door from visitor or delivery person, and he’d flee to the basement. Ironically, his escape route took him through the living room, the very room he wished to avoid. It was many years before he seemed to understand that if he stayed put, he was safe from the gaze of visitors/invaders.

Despite his “nerfussiness”, Jules was also a very fine hunter. We let our cats out only when someone is home and only during daylight hours. There’s enough open space nearby with hungry coyotes that any more freedom feels unnecessarily risky to us. Fortunately, both cats are pretty good about sticking close to home. There’s an area in our backyard that once featured bulbs, perennials and a number of herbs. During a major drought some years back, I took it off the drip irrigation system. This happened the year after I got a batch of poorly composted horse manure, with the net result that the pasture grass wins out most seasons. Some poppies, daffodils, oregano and lemon balm remain, along with lots of  tall grass. Perfect hunting conditions for our cats!

Jules would spend hours creeping through the grass, tracking his prey. Most summers, he’d get a few mice or voles, perhaps ten over the course of a summer. Two summers ago, he had a record year. Nearly every day, we were presented with a “trophy” at the back door. He’d announce himself with a distinct yowl, and BA or I would praise him and then dispose of yet another rodent corpse. I felt mildly bad for the rodents, but not bad enough to keep Jules inside. BA took to marking his kills on her wall calendar, with small mouse drawings placed on each day with a trophy. I recall that his total for the summer of 2015 was over 50. 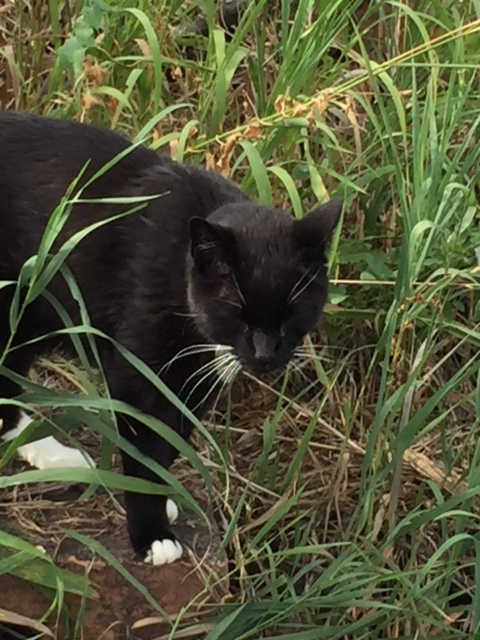 The hunter at work. photo by BA 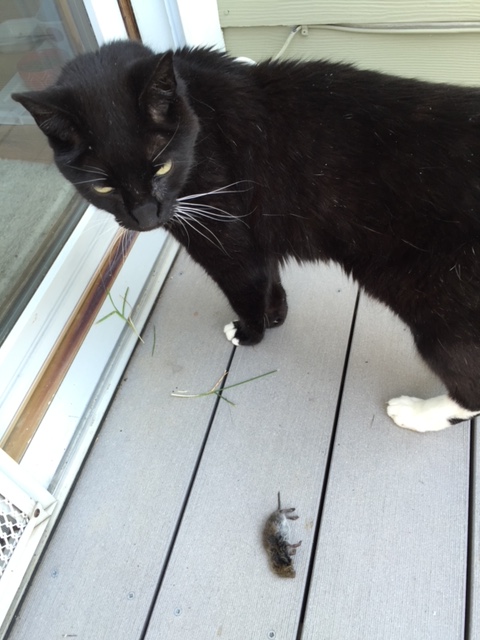 The hunter and the hunted. photo by BA

That summer was Jules’ peak as a hunter. After that, age and his arthritic hips caught up with him, and he was unable to pounce as he once had.

While Jules ceased to be much of a hunter, he continued to love to be outside. Mornings, he would sit in the sun by our apple tree. He also was happy to take either BA or I on a “tour”, walking us around the backyard, visiting his favorite sites. During the heat of the summer day, he’d hang out in the “under deck”, curled up against the house’s foundation and shaded from the sun. From there, he could watch the neighborhood goings on from relative safety. Later in the afternoon, he would emerge, and either hang on the patio, or move up to hang out with his friend Bernie (a burning bush in our yard).

Taking the morning sun by the apple tree. Photo by BA

Jules at 19, hanging out with “Bernie”

Like many cats, Jules was more solitary than not. He and his littermate Lucy tolerated each other reasonably well, with the occasional spat, usually over food–the favorite method of aggravation being to sniff the behind of the other so that the sniffed would move on and the sniffee could eat whatever was in the food bowl. Not uncommonly a swat and hiss would be part of the response. Similar actions would occur occasionally in bed. For many years, both Jules and Lucy would sleep near or on me, usually with Jules between my feet, Lucy higher up. And some nights, someone was in the “wrong” place, and another spat would ensue. Not restful from my perspective.

Under stress however, the two cats would “snug up” together. The picture below was taken at this summers routine vet visit, an event neither cat enjoyed. These last few months, it became more common to find him and Lucy sharing a seat in their favorite chair.

Jules and Lucy hiding behind me at the vet

This fall, Jules continued to go outside most days, although his sojourns became much shorter. He chose to spend more and more time curled in a comfy chair in our sitting room off the kitchen. BA and I hang out there, too, whether for morning coffee and newspaper or dinner and PBS. A tiny little room with two people and two cats–that’s a true family room. I still find myself sticking my head in the door to see how J is doing, touching base. This habit is going to take a while to fade.

I’m very prone to use nicknames for those I love. Sometimes the source of the name is obvious; more often, it just appears. Jules was named after BA’s father and eldest brother. As BA and I were wondering what to name our new kittens, Julian arose as a possibility. That morphed to Jules Irving, in honor of his “uncle” and “grandpa”. JI follows easily from there, as does J. I also called him Franklin Little Man, Frank, Frankie, or Little Man, and then there was Hunterman. No matter what name we gave him, he was a wonderful fellow. Thanks again, sweet boy, for gracing us with your presence. 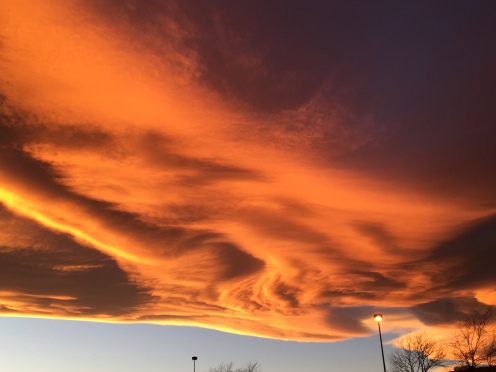 a fine sunset to move into