Total Eclipse of the Sun.

It’s going to be an adventure, however it turns out.

I wrote the above words before we started our trip last week. As you may know, not everything went according to plan, see Eclipsed! Plan Crash. Once our impromptu road trip ended with our arrival on the Willamette campus in Salem, everything went very well. Sure, the dorm room was a dorm room, quite basic, a little too hot, noisy from outside refrigerated trucks and the bathroom was down the hall.

We didn’t much care. BA and I have been wanting to see a total solar eclipse for years, so when the opportunity arose to join the Carleton group in Salem, we jumped on it (good thing we did as the trip sold out in less than a day). Our group convened Saturday afternoon, giving us time in the lead-up to the eclipse to explore Salem and environs, and to learn about and interact with others on the Willamette campus.

Joel Weisberg, a professor of physics and astronomy at Carleton was our faculty leader on this trip. We were able to take advantage of his many professional connections, receiving presentations from not only from Joel, but his friends, colleagues and former students who were on campus. We heard from the Willamette University president, Stephen Thorsett, a fellow Carleton graduate, some faculty members specializing in poetry and geology, and Professor John Seiradakis from the University of Thessaloniki, Greece, who was instrumental in the reconstruction of the Antikythera Mechanism, a more than 2000 year old geared instrument that may well be the worlds first computer. More info on that here: http://www.smithsonianmag.com/history/decoding-antikythera-mechanism-first-computer-180953979/

Our meeting and lecture room during our stay was Ford 201. Ford also was the working site for many of the scientists present for this research opportunity. I enjoyed walking through the building and seeing all their gear, vicariously being part of a research project. Telescopes, computers, all manner of stuff. Lots of languages as well. Greek, Chinese, English, and others I’m not recalling at the moment. 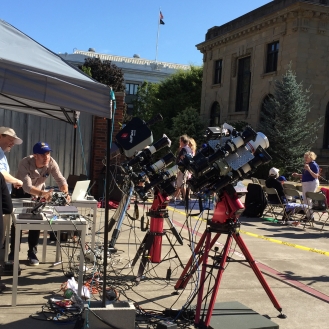 some of the equipment set up to monitor the eclipse

the Poster for the Iranian “Mr. Eclipse”

more equipment near the Ford building

This feeling of being part of something much bigger than me continued as the big day arrived. There were spaces reserved on the Willamette grounds for groups staying or working on campus, and the non-reserved spaces were opened to the public. Carleton was on the North lawn, adjacent to the rose garden, across the street from the state capitol building. A fine location. Nearby, there were T-shirt vendors, and tables set up by various scientific groups, happy to share their knowledge. Families, individuals and groups set up their camps, with lawn chairs, blankets and coolers. There was the enthusiastic feel of a fair or celebratory event. A bit different from the usual carnival due to the presence of eclipse glasses and binoculars.

Around 9:15 came the announcement over the PA system: First contact! A cheer went up in the crowd and then we fell silent as our shaded eyes turned towards the sun. Barely perceptible at first and slowly increasing, an indentation occured at the 1 oclock postition of the sun. Slowly the moon’s shadow continued to cover the sun. After a bit, we relaxed, doing other things while intermittently checking the eclipse’s progress. A fine time to wander about, visiting the scientists sharing information, opportunities to watch through their devices, taking photos of each other other and noticing the shadows cast by the partially eclipsed sun.

As 10 am approached, the shadowing of the sun increased. The air cooled perceptibly, and the light began to change. We were nearing totality, the reason many of us were in Oregon this day.

One thought on “Eclipse: The Beginning”

June 2017: I started writing Curioussteph.com with this: By day, I'm a retired family physician turned body-oriented psychotherapist. I garden, travel, am owned by 2 elderly cats, figure skate and am training for my first triathlon. April 2020: Three years later, the two elderly cats have crossed the rainbow bridge, and we now have an 11 year old adoptee, Ziggy. I'm done with triathlon and skating for the time being, and I am still physically active, running, biking and walking. It's now the time of the coronavirus, which is affecting us all. Coincident with that, my 90 year old father's replacement aortic valve is failing and he is now in hospice care. November 2020: I've added a new blog, Frog in a Hot Pot. Its of a more introspective nature, as I explore more of where I am in life and how it came to be this way, and how I find a way out of "hot water" View all posts by curioussteph